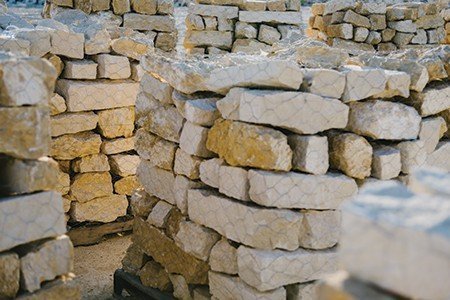 NOT Red, Yellow, or White.

A slab (flag) is a general flat stone, sometimes cut into a regular rectangular or square shape and generally used for paving slabs or driveways, patios, floors, fences, and roofs. It can be used in monuments, tombstones, facades and other structures. The name derives from Middle English Flaga meaning grass, possibly from Old Norse Flaga meaning slab or sliver. The slab is a sedimentary rock that is stratified along the bedding levels. Slate is generally a form of sandstone composed of feldspar and quartz and has a sandy grain size (0.16 mm – 2 mm in diameter). The material that joins the board is usually silica, calcite or iron oxide. The color of the rock generally comes from these cementitious materials. The typical colors of the panels are red, blue and beige, although there are also exotic colors. The slab is extracted in places with fissile layers of sedimentary rock. Around the 13th century, the ceilings, walls, and floors of European architecture became more ornate. The Anglo-Saxons, in particular, used slate stones as a flooring material in the interior rooms of castles and other structures. Lindisfarne Castle in England and Muchalls Castle (14th century) in Scotland are among the many examples of surviving brick storied buildings. Tile tiles are a traditional roofing material, a type of roofing tile commonly used in the Alps, where they are laid dry, often held in place with nails or hooks. In Italy’s Aosta Valley, stone tiles are mandatory to cover buildings in historic areas. https://en.wikipedia.org/wiki/Flagstone