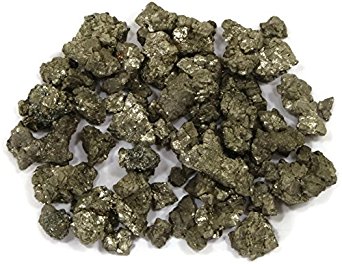 Pyrite is a brass-yellow mineral with a bright metallic luster. It has a chemical composition of iron sulfide (FeS2) and is the most common sulfide mineral. Pyrite is formed at high temperatures and occurs naturally in small quantities in igneous metamorphic rocks across the world. Pyrite is an abundant mineral, so much that many geologists consider it to be a ubiquitous mineral.

The name “pyrite” is after the Greek “pyr” meaning “fire.” This name was given because pyrite can be used to create the sparks needed for starting a fire if it is struck against metal or another hard material. Pieces of pyrite have also been used as a spark-producing material in flintlock firearms.

Pyrite has a nickname that has become famous – “Fool’s Gold.” The mineral’s gold color, metallic luster, and high specific gravity often cause it to be mistaken for gold by inexperienced prospectors. However, pyrite is often associated with gold. The two minerals often form together, and in some deposits pyrite contains enough included gold to warrant mining.

Pyrite is composed of iron and sulfur; however, the mineral does not serve as an important source of either of these elements. Iron is typically obtained from oxide ores such as hematite and magnetite. These ores occur in much larger accumulations, the iron is easier to extract and the metal is not contaminated with sulfur, which reduces its strength.

Pyrite is occasionally used as a gemstone. It is fashioned into beads, cut into cabochons, faceted, and carved into shapes. This type of jewelry was popular in the United States and Europe in the mid- to late-1800s. Most of the jewelry stones were called “marcasite,” but they are actually pyrite. (Marcasite would be a poor choice for jewelry because it quickly oxidizes, and the oxidation products cause damage to anything that they contact. Pyrite is not an excellent jewelry stone because it easily tarnishes.)

Sorry we do not have large pieces

Why did we Start AZROCK?