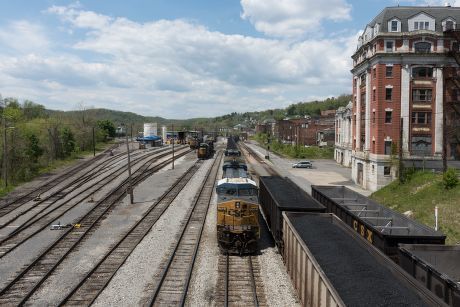 This is a flat gray with a little white marble.

Baltimore and Ohio Railroad (B&O), first steam-operated railway in the United States to be chartered as a common carrier of freight and passengers (1827). The B&O Railroad Company was established by Baltimore, Maryland, merchants to compete with New York merchants and their newly opened Erie Canal for trade to the west. A driving force in its early years was the Baltimore banker George Brown, who served as treasurer from 1827 until 1834 and had Ross Winans build the first real railroad car.

The first stone for the line was laid on July 4, 1828, by Charles Carroll, the American Revolutionary leader and last surviving signer of the Declaration of Independence. The first 13 miles (21 km) of line, from Baltimore to Ellicott’s Mills (now Ellicott City), Maryland, opened in 1830. Peter Cooper’s steam locomotive, the Tom Thumb, ran over this line and demonstrated to doubters that steam traction was feasible on the steep, winding grades.

The railroad was extended to Wheeling, Virginia (now in West Virginia), a distance of 379 miles (610 km), in 1852. In the 1860s and ’70s the railroad reached Chicago and St. Louis. In 1896 it went bankrupt. After it was reorganized in 1899, it grew further, reaching Cleveland and Lake Erie in 1901. In 1963 the B&O was acquired by the Chesapeake and Ohio Railway Company and in 1980 became part of the newly formed CSX Corporation. In 1987 the B&O was dissolved when it merged into the Chesapeake and Ohio.

The B&O’s long-distance passenger trains were discontinued in 1971 when the National Railroad Passenger Corporation (Amtrak) took over intercity passenger service, although it continued limited commuter service at Washington, D.C., and Pittsburgh. About one-quarter of the B&O’s freight revenues came from its traditional haulage of bituminous coal from mines in the Allegheny Mountains. Other important freight included motor vehicles and parts as well as chemicals.