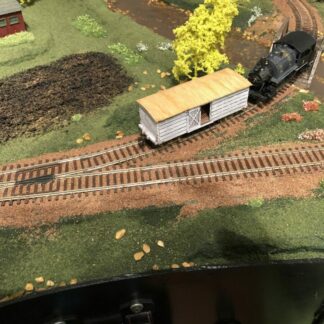 The Cumbres & Toltec Scenic Railroad, often abbreviated as the C&TSRR, is a narrow-gauge heritage railroad measuring 3ft (914mm) and runs for 64 miles (103 km) of track between Antonito, Colorado, and Chama, New Mexico, United States. The name Cumbres and Toltec is gotten from two geographical features along the route the 10,015-foot (3,053 m)-high Cumbres Pass and the Toltec Gorge. The line which was originally part of the Denver and Rio Grande Western Railroad’s narrow-gauge network has been owned jointly by the states of New Mexico and Colorado since 1970.

In 1880, rack crews of the Denver and the Rio Grande began to lay the first rails of the San Juan Extension going south out of Alamosa Colorado towards Antonito Colorado arriving in March of the same year. Instead of the standard gauge of four feet, eight and a half inches, the company chose to use the narrow gauge of three feet between the rails. They decided to use this measurement because the narrow gauge was cheaper to build and allowed for laying track where the larger standard would not fit. The line continued west from Antonito to Chama New Mexico arriving there on the 31st December 1880. The track had come 64 miles, through two tunnels, over a 10,000-foot mountain pass, and skirted a 600-foot gorge. The line then went onwards to Durango, Colorado. This extension was made in order to tap into the mineral-rich area of Silverton, Colorado. In 1968, the Denver and Rio Grande Western filed for abandonment of the narrow gauge line. The following year, the legislature was signed in New Mexico which provided a way for the state of New Mexico to purchase the track between Antonito and Chama. Colorado passed similar legislation in 1970. Both states took joint ownership of the line and the Cumbres and Toltec Scenic Railroad was formed in 1971.

C&TSRR operates between May and October with two trains, one in each direction which depart every morning from Antonito and Chama. Both trains converge for lunch at Osier Colorado. C&TSRR in addition to its through service operates numerous special excursions during the season such as dinner trains. During the holiday season, the C&TSRR on certain days offers special “Santa Trains” from both Chama and Antonito as they encourage guests to come along with food or presents for the less fortunate.

All of the steam locomotives operating on the Cumbres & Toltec Scenic Railroad are former Denver and Rio Grande Western locomotives. The railroad owns four classes of steam locomotives. K-37, K-36, and K-27 engines are all outside frame 2-8-2 engines built by Baldwin Locomotive Works. The T-12 No. 168 is a 4-6-0 inside frame engine also built by Baldwin Locomotive works. 2 class DE B+B-22 diesel locomotives are owned by the C&TSRR for emergency assistance should the steam engines run down. They are also put to use for operations outside the normal operating season.

Granite is the most common igneous rock (rocks formed through the cooling and solidification of magma or lava) on Earth. In the case of granite, it originally crystallizes below Earth’s surface, where its slow cooling allows large crystals to form. You may have seen granite take shape as some of America’s favorite sights like Yosemite Valley or a few guys on Mount Rushmore. Granite has also been mined and used for daily applications for thousands of years, from ancient hand tools to modern-day countertops.

Cumbres and Toltec Brown Ballast as a crushed stone form are used as a pavement building material. It is used on driveways, garden walkways, bocce courts and petanque terrain, and urban, regional, and national park walkways and heavy-use paths. DG can be installed and compacted to meet handicapped accessibility specifications and criteria. Different colors are available based on the various natural ranges available from different quarry sources, and polymeric stabilizers and other additives can be included to change the properties of the natural material. Decomposed granite is also sometimes used as a component of soil mixtures for cultivating bonsai.

While DG is most commonly used for paths, driveways, garden trails, and as a xeriscape ground cover, it can also be used to create smooth visual transitions between formal garden and wilderness. One of its advantages is that it breaks down, so any DG that migrates into a lawn or planting beds does not cause problems the way gravel does. Lining a path or patio with a black metal strip (which will disappear if buried low enough) will help keep it in place.