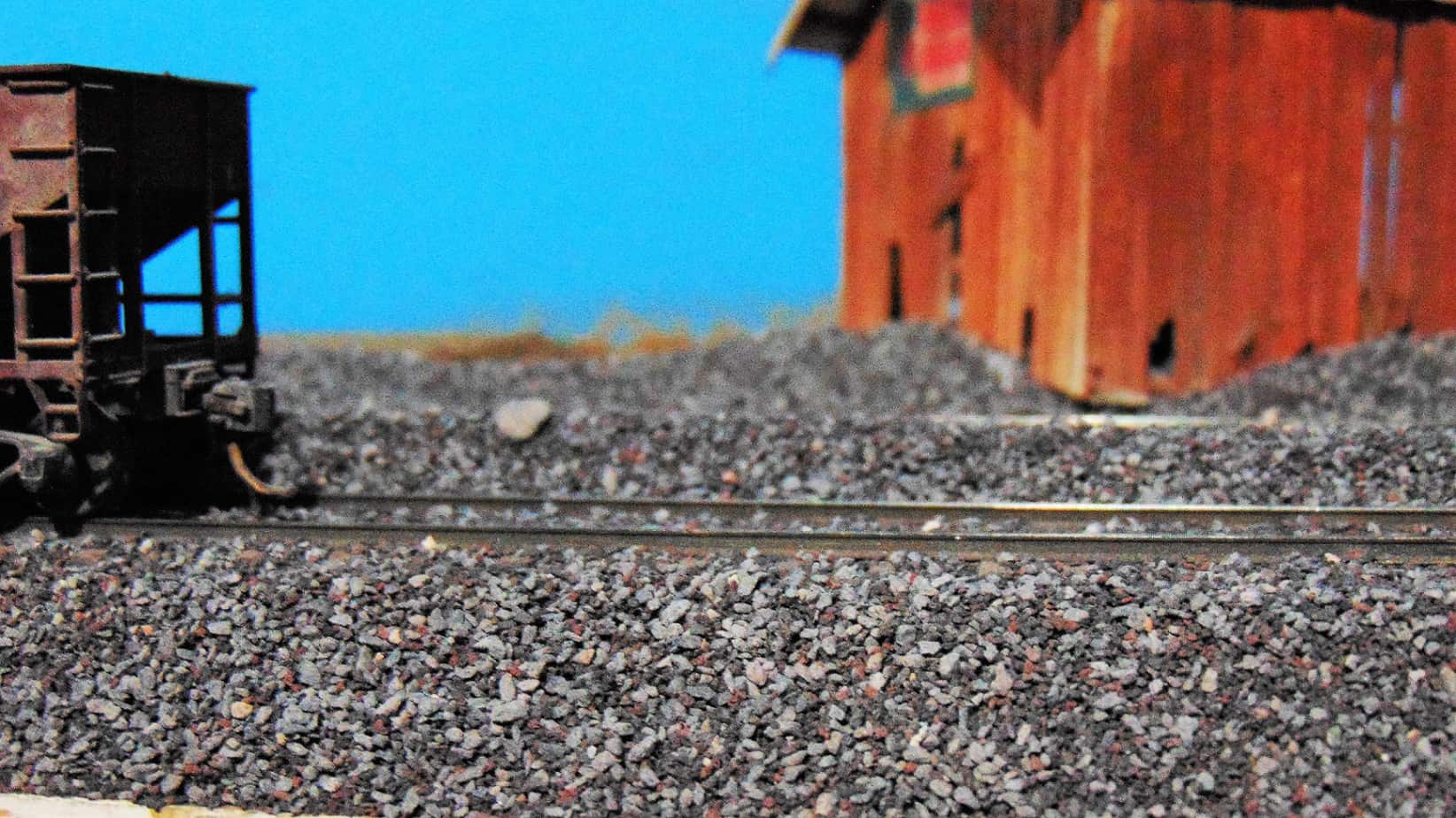 US
Yard mix for turntable

The Yard Mix worked out perfectly for the bottom of the pit on my turntable as well as the surrounding area and as ballast for the 4 service tracks. This material is pretty fine and quite light so it moves around more easily than other kinds of ballast. I spread 20% thinned glue with a foam brush and sprinkled the yard mix with a Woodland Scenics accent shaker. Then sprayed Scenic Cement after adding greenery and letting everything dry.

Ballast is great! Service was even better. Ordered it one day and received it the next afternoon. I had been using ashtray sand for yard ballast which is too large and too coarse for HO applications. The Yard Mix 1222 looks great and is very easy to apply. Thanks!

Track ballast (usually crushed stone), as it is known, is another important part of railroad infrastructure. Although it may just look like plain ole gravel this stone plays a vital role in acting as a support base for the railroad ties and rails as well as allowing for proper drainage of water away from the rails (which is why the stone is always sloped downward and away from track).

You may be wondering how such a term came to define the stone which supports the railroad track structure. Interestingly, it has its roots dating back to early times when stone was used as ballasting for sailing ships.  In today’s railroad industry the use of ballast, its application, and purpose has changed little since it was first employed and will likely always remain an important component as a part of the track structure.

In new construction or for repair work, the tracks are ballasted to yard/industrial standards – a lot less depth than mainline, since speeds will below.  Then the spaces between tracks are filled in with smaller gravel to tie-top level to provide better footing for yard workers.  French drains are often installed for drainage, and there may be a manhole or two where the drain lines trunk together.

Over time, the ballast gets fouled with spilled lading and blown-in dirt.  Weeds begin to grow.  During the transition era and earlier, journal box drippings would slowly saturate the ground (poor man’s tarmac.)  Cinders from the ash pit would be spread on the yard. Well-maintained yards will be kept pretty clear of foliage and will occasionally get a ballast transfusion where needed.  Unmaintained yards will gradually change to muddy quagmires, sometimes with tracks submerged below the railheads in glop.  Tall weeds and bushes abound, and even an occasional sapling if the tracks are embargoed. An interesting effect to model – the entire yard somewhat grimy with some weed growth, one recently changed out or realigned turnout with fresh, clean ballast.

Most (if not all) prototype yards had something keeping the tracks in place.  Cinders were common during the steam and early diesel era. As was “regular” ballast when major yards were built/rebuilt over the years.  Over time, dirt, soil, grease, grime, and everything else might transform it into something looking as if there hadn’t been any ballast, to begin with.

Of course, while crushed stone (often limestone or quartz) is the aggregate of choice for today’s railroads in years past everything from slag to cinders has been used (always resourceful years ago railroads would use whatever they could find). Some light density railroad lines would appear jet black as nothing but burnt coal cinders were used to ballast the route. In any event, track ballast must regularly be cleaned or added as when dirt and grime build-up within the rock it reduces its ability to properly drain water.

The ballast also acts as a support base for the railroad track structure giving it strength and rigidity but also allowing for flexibility when trains pass over. Limestone or quartz is often most used as ballasting because it is a hard stone that will lock together providing for extra strength.