Engine service yards, railway yard, or railroad yard. They are a complex series of railroad tracks for storing, sorting, servicing or loading and unloading, railroad cars, and locomotives. Railroad yards have many tracks in parallel for keeping rolling stock stored off the mainline. So that they do not obstruct the flow of traffic. Railroad cars are moved around by specially designed yard switchers, a type of locomotive.

Cars in a railroad yard may be sorted by numerous categories, including railway company, loaded or unloaded, destination, car type, or whether they need repairs. Railroad yards are normally built where there is a need to store cars while they are not being loaded or unloaded or are waiting to be assembled into trains. Large yards may have a tower to control operations. Many railway yards are located at strategic points on the mainline. Main-line yards are often composed of an Up yard and a down yard, linked to the associated railroad direction. There are different types of yards, and different parts within a yard, depending on how they are built.

Locomotives are amazing. They are built to withstand the rigors of service, running 24 hours a day, seven days a week for decades. But the stress of endlessly operating for long periods of time coupled with outside forces such as slack action, rough track, and extreme environmental changes, means failures will occur. When the inevitable does happen, railroads must route an ailing locomotive to a shop. They get the unit back on the road handling freight as soon as possible.

In the steam era, locomotives shops were plentiful. But as diesel took over and railroads merged, the number of shops has dwindled as outdated or redundant shops were eliminated. Engine service yards are some of the most popular features of any layout. Icons of their era, they say “railroad” in a way few other buildings can match. They serve an important purpose: taking care of the many mechanical needs of the iron horse. And just as engines evolved over time, so did the yards that served them.

Keeping steam locos ready for the road was a big job. After each trip, they had to be refueled, cleaned, oiled, and inspected. This work (called “turning,” even if the engine wasn’t spun on the turntable) was done at engine terminals. Early on, terminals were about 100 miles apart, but newer, larger engines with bigger tenders could travel further. Since these locos were often too big for older service yards, railroads built new ones or remodeled what they had. As a result, no two were quite the same. Each was designed to fit local conditions, leading to some creative arrangement of the facilities. Despite this, each terminal was equipped to do the same jobs.

The first stop was usually the ash pit to “clean the fire”. On coal-fired engines, ash and cinders fell through grates at the bottom of the firebox into an ash pan. To keep air flowing through the grates in the loco’s firebox. The ash pan was emptied into a pit between the rails each day. With tons of ash and cinder dropped each day, the pits had to be emptied regularly—a problem that got worse as engines got bigger. But cinders made ideal ballast and fill so they were recovered from the pit. At many terminals, a railroad crane equipped with a clamshell bucket cleaned out the pit and placed the cooled cinders and ash in a gondola. At other terminals, ash hoists made quick work of the job.

Big engines had big appetites, and big tenders to serve them. Many roads found older coaling towers couldn’t keep up and contracted with outside firms to design and build new ones. By the 1920s, concrete was the material of choice as it was easier to work with, cheaper, weatherproof, and fireproof. Railroads also began building large towers on the mainline to refuel engines on the road and prevent bottlenecks at busier terminals.

And the same sturdy construction that made these towers so appealing to railroads. Also made them hard to get rid of. With its metal parts removed for scrap, the tower could still stand in a contemporary scene, a reminder of how things used to be. In addition to coal, tenders would be topped off with water. To meet demand, railroads installed large steel water tanks in modern terminals. Space was scarce, so the tank was built away from the coaling tower. Underground pipelines fed trackside water columns (also called standpipes, water cranes or penstocks) installed between tracks to service engines on either side. Roads that used oil for fuel built storage tanks and trackside oil columns.

Because steam locos were built to run facing forward, they often had to be turned around for their next trip. Most terminals were too small for a wye or loop but did have space for a turntable. For many roads, the length of the turntables dictated the maximum size of new engines. And if larger locos were ever needed, older turntables had to be replaced.

Roundhouses were some of the busiest engine service yards on a railroad. Here, workers inspected and serviced locos undercover. In an age when electric lights weren’t too powerful, large windows allowed plenty of sunlight to shine inside. Most of the work was done on the cylinders and valve gear upfront, so it was common practice for locos to face the wall. And if the brakes should fail or the throttle slip, it was better to crash through the windows than into the turntable pit.

The size was based on the number of engines coming and going in any 24-hour period, with the busiest terminals requiring full-circle roundhouses. Though engines started growing early in the 20th century, no one foresaw the monsters that were in regular service by the 1940s. Roundhouses just a few years old were suddenly too small to handle these giants. Older facilities were either razed for larger replacements. Or remained in use to handle smaller power, with the newer, modern roundhouse built alongside. 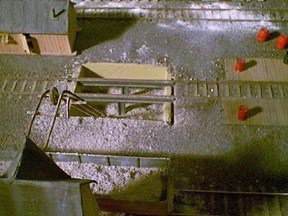 USe around all your steam engines repair and service areas.