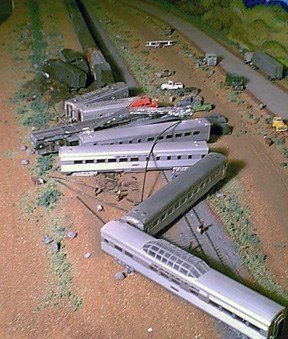 Is this the horrible result of a model railroader that switched from DC to DCC?
(My scene was inspired by an article in Trains Magazine published many years ago.)

The scene was built in twelve hours including hand laying the track. High Desert Soil (#107-03) is the ground cover with some #40 Blended Grass and # 62 Conifer Green Foliage amidst broken ties and twisted rail.
OOPS!
Looks like someone threw a switch the wrong way again.

The scene is modeled after a real train wreck between no. 8, the “Fast Mail” and no. 19, the westbound “Chief”. This disaster happened in September 1956 at Robinson siding New Mexico.

The Northbound Mail was sitting in the hole waiting for the Chief to pass by when the North Switch had been thrown the wrong way in the middle of the night. News reported out of Albuquerque was able to hop on an airplane and get aerial pictures of the devastation. 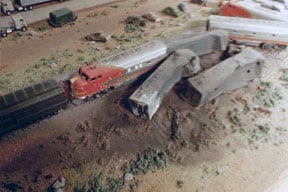 It’s totally impossible to have a head-on collision like this using DC.

Now look at the mess, twisted and burned diesel with death and injuries to the crew.

The Undertaker and Priest were summoned to sort out the living from the dead. “Oh why, oh why”, asks the owner of this layout, “if I stayed with DC, this never would have occurred”. 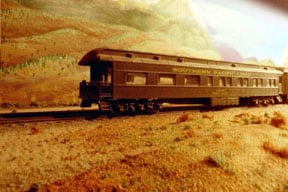 One of the Santa Fe’s private cars was at the rear of the Fast Mail and the occupants escaped injury even though the train was shoved back a car length from the collision. 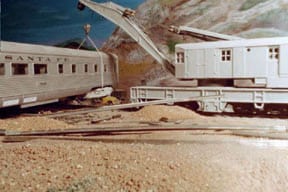 In the wee hours of the morning, the boom car was brought in from Raton NM to salvage what it could. In order to lift the passenger car, numerous lead weights had to be installed in the Athearn boom car as a counterweight.